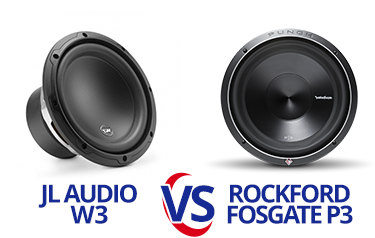 Rockford Fosgate designed the P3 subwoofers to stay strong even when the bass gets hot. This Punch P3 sub features a rigid anodized aluminum cone that holds its shape through heavy play while staying light and responsive. Rockford Fosgate uses a new technique to attach the oversized rubber surround to the cone that increases the available cone area up to 25%, so this sub can push more air for even bigger bass. The aluminum cone acts as a giant heat sink, directing heat away from the copper-clad aluminum voice coils. Special venting keeps the voice coils cool, so you get incredibly consistent bass performance over time. These P3 subs feature an extended pole piece and bumped backplate that leaves more room for a heavy excursion, so it'll hit deeper lows without "bottoming out." The dual 4-ohm voice coils allow you to wire the sub for 2-ohm impedance to get maximum power output, or for 8-ohm impedance if you're using multiple subs. The P3 series subs work equally well in a sealed or ported enclosure, so you can choose the kind of bass you want for your system.

The JL Audio W3 series comes in several different sizes that include 6.5", 8", 10", 12". and 13.5" models. For the Rockford Fosgate P2 series subs, the diameters come in 10", 12" and 15" sizes. With more variation in sizes from the W3 lineup, you'll have a better range of options for multiple sized installations. You may want to begin your search there if you're planning on starting your install based on subwoofer diameter.

The JL Audio W3 series features a single coil construction model across all the sizes in the series. The W3 also offers both 2-ohm and 4-ohm options in all sizes, except for the 6.5" model, which only comes in a 4-ohm model. In the P3 series subs, Rockford Fosgate has used a dual-coil construction. With these subs, it has included a 2-ohm and 4-ohm configuration at each size. At comparable sizing, the main deciding factor you'll want to look at will be the single or dual voice coil construction between the two subwoofer lineups.

The JL Audio W3 series has RMS power handling ranging from 150-600 Watts across the entire lineup of subwoofers. For power handling in the P3 series, Rockford Fosgate has a range from 500 watts RMS at the 10" range, all the way up to 600 watts at the 15" range. Between comparable sizing, you'll see roughly the same power handling between the two lineups here. The power handling will lead us to look at other categories for better-deciding factors between the two models.

At comparable sizing between the two lineups of subwoofers, you'll see a slightly shallower mounting depth from the JL Audio W3 lineup of subs. If you're working with any space restrictions on your installation, be sure to look at the mounting depth installation numbers from the W3 lineup.

For the recommended enclosure sizes at comparable diameters, the JL Audio W3 subs are relatively equivalent to the Rockford Fosgate P3 subs in terms of sealed enclosure recommended sizing. However, a slight edge is given to the W3 lineup of subs when it comes to recommendations on ported box volumes from the manufacturer. If you're looking for an install to feature a smaller ported box, you'll want to make sure to begin your search with the W3 lineup of subs.

The recommended amplifier for your subwoofers will vary greatly depending on the size and quantity of subwoofers you select for your installation. The following lists are comparisons between amplifiers for subwoofers in the same dimensions between the different models and brands. The list begins with a factory recommendation for amps that provide enough power handling for the subwoofer(s), and then move on to our professional recommendations that may vary slightly from the factory recommendations. These Classic Car Stereo recommendations may be an amp with a higher price point that will service the subs better, or an amp that provides RMS power handling over the recommended amount which will allow you to not have to maximize the output on your amp to provide full power to your subs.

The JL Audio subwoofers do feature a higher price point than the Rockford Fosgate P3 lineup. However, with the upgrades in construction materials and comparison advantages listed above, any JL Audio fan will see immediate value in the difference in cost between the two lineups.

Need more info? We'd be happy to help.
ChatChecking Status...
Email1 Business Day
PhoneChecking Status...
Feel free to contact us by email at support@classiccarstereos.com or use the contact form below and we'll get back to you as soon as we can.
Between 8am - 5pm PST, you can reach us toll-free at 888-789-7297 or our local number 760-477-8525